There is a bustling revitalised area of Sydney called Spice Alley. A place for selling cardamom, you might think. A taste from every corner of Asia might surprise you a little more, particularly squeezed into this bright space right next to the cheekily named Central Park complex. The most peculiar feature of this new-ish yet old-ish part of town is the restoration of a series of 1840s houses that were rediscovered in recent construction. I was shocked by my first encounter by these houses. Nestled next to shops selling decadent too-beautiful-to-eat cakes, these vibrant houses are a new way of looking at the past.

Never had I ever guessed that homes in the 19th Century were painted in reds and yellows. Photography was invented around about the same time as these homes where built. And, as we all know, photos came in a familiar shade of sepia back then. I had somehow, naively, thought that the past came in washed out shades of earthly - ochres and beiges and yellows. This is not entirely naive, of course, because certain pigments have long been a sign of wealth (particularly blues, which are notoriously hard to obtain over history). I had somehow imagined the past was full of washout shades of nature and not the rich shades of these buildings. But not everything about history is the way we imagine...

Ten years ago, standing outside the now even-more-infamous Notre Dame de Paris, my best friend and I marvelled at this building that was never quite finished. Looking up to the columns either side of the impressive entry where one could imagine the awe inspired in hearts of French citizens for over 800 years, we marvelled. On either side, up the top, were meant to be spires. And spires there were not. It looks incomplete. More so, now, of course, that the roof has burned down. And so when the cries go out for things to go back to the way they were "meant to be" one must wonder...what was it ever really meant. to. be. The building, like our lives, was never quite done.

The best laid plans have time and time again been thwarted by planners and architectures and politicians alike. In 1788, Governor Phillip proclaimed in this newest settlement in one of the oldest lands, that there would be a city where "the principal streets are placed so as to admit a free circulation of air, and are two hundred feet wide..." For any of you who have visited or lived in modern Sydney, you will know that this is not the case. The city grew organically, following natural rivers and gullies and old tracks laid by the true protectors of this land.

Early roads lead to water. In this city where land often loses to the waves, boats were integral to the movement of resources. Initially, the resources came from halfway across the world. Later, river transport would bring supplies from the more fertile soils of far away Parramatta (the place where the eels lie down). If you drive over ANZAC Bridge and look over Glebe, you will see an array of roads obscuring, running to, attempting to evade nature's inconvenient way of putting water where humans would prefer to walk. Old maps will show you Black Wattle Swamp Cove (upgraded to Black Wattle Bay in modern terms, because who wants to live near a swamp). This area used to be my own. I lived on the edge of Annandale, named for the birth place, Annan, of Major George Johnston, whose name is now borne by the suburb's main street. This grand, wide, tree-lined street is flanked by beautiful terrace houses and incredible mansions. The old Abbey, rumoured to be haunted, strikes a pose in the spectacular sunsets that grace this part of town. And walking past these beautiful edifices, I often found myself imagining horse and cart dragging supplies towards the local townships from (even then bustling) Parramatta Road (which used to be Parramatta Street). It turns out these daydreams of functionally wide streetscapes were just that - fantasy. The magnificent street was made that way as a symbol of wealth and grandeur. Horse and cart it may have carried. But it was not wide to allow for capacity. It was wide to remind the world that the Major was in the big leagues.

What is now Central Station, a stunning building hiding ugly tracks and gravel, was once a burial ground repurposed for the living. A park near my current home was once just named the rather unappealing "swampy" on maps. The now cookie-cutter suburb of Breakfast Point was once the industrial Australian Gas Lighting Co. What was once evolves to what is needed now.

This city is not static. Like a home renovation for a growing family, our roads and resources change for the people living here. They change to plan for new arrivals and to prepare for our future. It will be planned. It will end up organic. Even with the best laid plans...where are those spires? 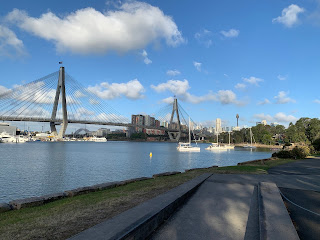