Define home. A question I have asked myself, and others, many times. Home is where I stand, "they" say, as if we can always embody all that is belonging wherever our feet take us. Home is the ocean waves and the tree tops and the hard pavements of concrete jungles and the wide expanses of farm lands, because all of these places are places we have been. Not to worry that we can feel distinctly out of sorts in many of these places. A child who feared water becomes an adult frozen at the beach.

And then, really, if home is where I stand, why do so many deny home to any who seek to stand here? My excellent, intelligent, fellow doctor, insightful and considerate friend celebrating his 30th birthday, singled out for his colour and his accent, and despite no desire for a fight, was coward-punched while being told to go back to where he came from. No matter that this place has been his home for over a decade. No matter that he pays substantial taxes to help support this country and all it stands for. No matter that he spent a fortune on international fees for university, studying for close to a decade and over a quarter-million dollars contributed to running our institutions.

If home is where I stand, then how is it that my friend, born and raised in one country, living in the same city where he grew up, can sometimes feel more at home in the country of his parents than the one imprinted in his own memories? How is it that his own city, his own people, often reject him for his skin colour, for the fact that he can speak another foreign-sounding language despite carrying the accent of the people around him? How sporting a hipster beard for him is instead an occasional marker of terrorist rather than cool young person despite being quite the opposite of someone who would ever cause terror.

How is it that my little nephew, born into difficult circumstances, and being given a loving life full of opportunity, still finds himself singled out, mellowed, asked to be quieter and more careful, because there's little quite as life-threatening as being black in America.

And how is it that I, born and bred in Australia, and as white as my free-settling ancestors, can find myself an outsider in a world where I should fit in? Perhaps it is that I am asked, frequently, whereabouts I'm from (with guesses as wide-ranging as South Africa and Nordic nations, which is a particularly interesting guess with my sliding Australian-American accent).

For someone with wanderlust and itchy feet, it's an unusual thing to crave the security of a single point to call home. The proverbial old white picket fence, or even four standard walls and a roof with a singular postal address for, say, six months or more. That stability has become all too uncommon. The craving instead for security and sameness because that assurance provides strength for greater challenges in the day. Not worrying constantly about where one will sleep leaves more mental space for creativity, depth of thought, and emotional resilience.

A few months ago, there was a campaign in our hospital to raise awareness about the rates of homelessness in the community. It was an attempt to open our eyes to the difficulties some patients have with discharge planning and the troubles that sometimes land them in our care. And so the conversation turned to my own, often precarious, housing situations over this year. The fact that I was, for large parts of the year, reliant on the accommodation provided by respective hospitals in order to have a roof over my head. The fact that I had resided in three different cities with some level of permanence, and that the frequency of moving limited my access to many of my possessions, which in turn had a tendency to increase the cost of living. The fact that, for some periods, I was reliant on the goodwill of friends for a roof over my head, and had they not provided such measures I would have been limited to hotels and motels. Of course, my own experience is, in the grand scheme of things, hardly a worry given my consistent access to a well-paying job. If required, I could have at any time paid exorbitant amounts of money to stay somewhere but it was regrettable that this year involved so many wheres.

I started the year on the outskirts of Canberra, a beautiful giant country town of rolling hills and sunburnt fields. I've always said that Canberra makes me feel like I'm living in Dorothea MacKellar's world. I was living in hospital-provided accommodation, a soulless apartment that felt like home because of the memories we made. Just down the road was the home of my best friend. Their many previous addresses scattered through the leafy streets of Anslie and O'Connor. Their unreliable health leading to chronic homelessness, frequent couch-surfing and delayed study goals. And the homelessness in turn leading to a chronic stressor that made it harder to focus on health and studies. They were frequently evicted because the only places they and their friends could afford to rent were places in disrepair, whose owners often decided to demolish and rebuild to sell for large profits. One place burnt down, their possessions lost with little recourse for someone who could not afford contents insurance. The ACT has one of the lowest levels of homelessness per capita, at 40/10 000, but that does not absolve us of the problem.

From Canberra to Alice Springs, via three weeks of no fixed address travelling and relying on friends and family for accommodation. My car carried me, my life documents, my saxophone and my summer wardrobe. My friend kept my suitcase safe. And all of my other worldly possessions sat safely in storage.

The levels of homelessness in the Northern Territory are truly astounding, at 599/10 000, a rate that reflects deeper social disadvantage and issues with access. In the Northern Territory, the issue is much more complex than I have time, space, or cultural knowledge to explain. And yet, working in the region, it was obvious how little the health system could help with problems that stemmed from unsafe, unsanitary, and often unstable housing. It's hard to keep clean the dressings on one's diabetic foot if the floor is made of dirt and the only access is by infrequent bus or foot.

From Alice Springs, I returned to Sydney, the economic capital of this opal-hearted country, where it is now more expensive to live than either New York City or London. Despite lock-out laws and frustrating public transport, the city continues to push incomes to the limit. As a relatively high-earning individual, it has become normal to find single-occupancy renting unaffordable. It has become next to impossible to accumulate a 20% deposit for purchasing a humble property in a desirable (if not perfect) location. And so I wonder how my less well-to-do colleagues and compatriots manage in this burgeoning city.

Most of us want to have a home. Not just four walls and a roof over our heads, but a place that feels like belonging. A place to keep our things and to make memories. A place where we feel welcomed and where we can welcome others. An oasis of stability in a life that can often be unstable. This is by no means a guarantee anywhere. But this is meant to be the lucky country. We are, ostensibly, multicultural. A melting pot of ideas. A safe haven. But the reality is less kind. It shouldn't be so hard to stand in one place. 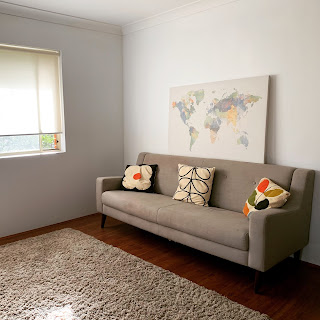