Death is a funny thing. The absence of something that once was, that once was not at all. The apoptosis or necrosis of cells. The grim reaper. The end of a concept or relationship. There was, once, a time when that thing, person, or concept had not yet become even a dream.

Death. The ending of hope. The green shrubbery I purchased so many years ago, enthusiastic that my naming of two native Australian plants and placing them proudly on my verandah would lead to green thumbery. Only then, months later, to be asked as to the wellbeing of Larry and Marg. And to, embarrassingly, ask my concerned friend who these folks were. Your plants, he pointed out, at which point I ran to my verandah to find them very much perished in the Dubbo sun. The baby put in his crib, only to be found silent and still some hours later. The teacher I had who had fathered the babe, telling us of his loss some sixteen years later, the pain still etched upon his cheeks. That child, who could have grown up to be an actor or an accountant or a zoologist, never had the chance. The loss of what could have been.

Death. The slow ebb of a long-life well-lived, the loss of sage advice. The forefather of a new field who pioneered an avenue of academia and wrote extensively, only to perish before the last pages of a work were typed. The grandmother with a secret recipe for a family favourite, never having let anyone else in on their kitchen shenanigans, losing the key to dementia. The loss of wisdom and experience. The stories never told.

I remember the night you died, although I did not know at the time that that's what it would be. I remember waking, bolt right up in bed at 2 am and not being able to get back to sleep. I remember that because it's unusual for me to wake at all, and even more unusual to not fall straight back to sleep. And I remember it because of what followed. The dog pawing at my door, unusual for him at that hour. The dog barking incessantly, and howling up at the night sky, and staring into my eyes with a deep fear. I remember being shaken by this strange behaviour; concerned at the time that perhaps someone was trying to break in, and checking all of the doors before returning to bed for a fitful night's sleep.

I remember that day, flipping open my phone to half-read a message I did not want to see, and half seeing a word I had hoped I had imagined. I remember being distracted and rattled, and half-hearing my colleague tell me I'd be operating next, and not being able to muster my usual level of enthusiasm for this particular activity. I remember operating with a fearful level of concentration, trying so hard to not re-read that word I'd half-seen but knew was there. And I remember, for the rest of that working day, handling my phone like a hot potato, willing the hours to go past both fast and slow. Fast, because I wanted to fall into a thousand pieces. Slow, because I feared what that would look like. And I remember, late that evening, leaning against the door in the change room toilets trying not to howl with grief.

I remember catching the bus home that evening where the bus-driver accidentally missed a stop. Getting off together at the next location, an able-bodied woman screamed profanities at the driver, and I wanted to yell back at her. But what could I say except that it's only a bus stop, and it can't be nearly as bad as your best friend dying.

I don't, however, remember that very first moment we met. And I don't remember the last moment we spent together. I remember that first working meeting, where you and I and our gang of enthusiastic, passionate, go-getting friends linked up in a city we've both had occasion to call home. I remember you carting yourself around on a bicycle between your on-campus leadership responsibilities, your city-bound government committee meetings, and your other-side-of-town job. And I remember, even in that first encounter, how much I admired your grit and determination. Little did I know that that would be the beginning of the best platonic relationship I've ever had.

I haven't known, in these six weeks since you left us, how exactly to say goodbye. And I'm not sure I'll ever quite know. But I knew I would have to write, and I knew it should be something for the world to see. Because you were a person this world was so lucky to have.

Dearest Thug Wife (for that is what you called yourself),

So many people who loved you, and who you loved, gathered yesterday in a city you sometimes called home. We didn't gather for your birthday, or to celebrate you finally getting that law degree, or to clap you on as you accepted a role as Australia's first non-binary Sex Discrimination Commissioner, although we would have all preferred meeting for such an occasion. We gathered to mourn, and to cry, and to remember you in all of your magnificent glory.

I saw all of these pictures of you as a child - an aspect of your life we rarely discussed - and of more recent times. And, sitting outside surrounded by your people, I was taken back to a time before I knew you when I was a medical student in Papua New Guinea. I remember we had a patient die in our Emergency Department and the whole family took up our assessment room to mourn. They wailed and howled and cried and danced sorrowfully for hours while we tried to work. And for the first time since that overwhelming experience, I understood why they did that, and I wished it was okay to wail and howl and dance sorrowfully here in Australia, because that is what I would have liked to do for you.

As people spoke of your intellect, your passion, your drive, I remembered so many of our times together. The drives down Parkes Way listening to my terrible taste in urban music while discussing the sociopolitical background of gangsta rap. The way you would convince me to buy excessive amounts of (sometimes cow-containing) footwear, knowing full well that we have the same size feet and those shoes would invariably end up in your wardrobe. The way we would have deep and meaningful conversations on long country drives, both uncomfortable with the honesty we faced along the bumpy journey, and both directing ourselves towards that challenge. The way I once drove all the way to your city to join you at the phlebotomist, where we gently sang songs to distract you from an unrelenting fear of needles. A fear that seems somewhat impervious to desensitisation therapy judging from the number of piercings you got just to challenge said fear. The way you'd insist on joining a gym pretty much every time we were in the same town, and how you'd take to your new membership with the same vigour you threw at every challenge. The way you'd ask me to proof-read your assignments, as if I could add any useful feedback on ontology or gender theory in a legal framework. The way you'd send me your resume for formatting advice, concerned you wouldn't be qualified enough for the unpaid but extremely desirable legal internship, and I would have to write back that the only problem with the document was its unmatchable calibre. And the way that you'd always turn back those compliments to reflect on my own (not nearly as impressive) experiences.

My dear EJKB, the memories are so palpable. There is not space here to write them all. You were powerful and courageous, intelligent and fierce, driven and relentless, focused and reliable, attentive and concise, deep and thoughtful, strong and gentle, loving and immensely loved. You were exceptional. And the world is a little darker without you.

Here is a list, my dear, of some of the things I've learnt from you:


During one of our chats before I felt you falling, slippery, I remember you telling me of a conversation you and JP had one night. How you one-upped each other on how much you would sacrifice to save me from a hypothetically burning building. I think everyone at your memorial would donate their left kidney, and then some, to have you back. But it doesn't matter how many kidneys we could harvest, there will be no more long conversations on bumpy roads or at local cafes or while walking up Mt Ainslie. There will only be the parts of you that live on in all of us. You have, as you said, returned to the carbon cycle.

Rest in power, my most wonderful friend. I miss you. 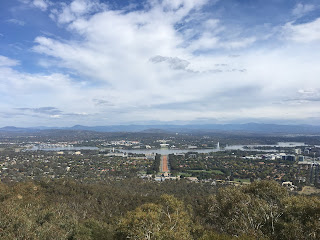 Lance Abel said…
She sounds like she was a lovely person, it was nice to hear about what she meant to you and no doubt to others.
18 November 2018 at 09:45