From the lookout at Twin Peaks, sunset drapes the bustling San Francisco's crisp air with specks of orange and pink light. As twilight comes, the city lights dot the stretch of land below us. From the aeroplane flying into Los Angeles, smog-covered gridded streets stretch out almost endlessly east and south, to be stopped in the north by the mountain ranges. Below us, cars are filled with some of the nearly twenty million people who live and work in the area. From a tiny twin engine flying between provinces in Papua New Guinea, unable to be traversed by other means, little villages are seen either side of a river, no bridge to connect them. Here, boats are required to visit tribes on the other side.

From above, whether a plane or a hilltop, it's easy to see just how many of there us there are sprawled across the great plains of the earth. We dot the planet with our lights and our roads, connected by streets yet isolated by our cars and our houses. Standing on a balcony with a new friend the other week, we stood and observed the stretches of our city before us. I'm an earthly being; I think about the people intertwined by location and common humanity. My new friend, who studied astrophysics, looks up to the night sky and sees us as even smaller creatures. We are but grains of sand in the universe. We stood side by side, marvelling at our insignificance in the universe. We simultaneously felt grateful and humbled, both for our smallness and for the knowledge that our roles are not without weight.

When I was doing my undergraduate studies, I took the bus to and from university each day. The morning journey meant sailing past the Eastern Parkway traffic in our special express bus lane, watching the thousands of commuters frustratingly advance only centimetres each minute. The evening return trip was through the more convoluted suburban streets, where we too would be caught up in the traffic. From our elevated vantage point in the bus, my best friend and I could wonder at these people who were trapped in their tiny metal boxes next to us. We would travel along the same path for a distance, only to be separated by a left or a right turn at the next intersection. Where do they go, I wondered. Who are they? Are they happy today? Will we meet again in this traffic tomorrow?

Sitting on the train, fellow commuters come and go. We all sit plastered to our phones or our books, or head uniting with the window to become a resting place. A small number banter loudly on their phones, letting the whole carriage know of their dinner plans or their frustrations of the day. We try not to listen, and yet it is that person we come to know best on the journey. The teenagers travelling home from school shout excitedly about the latest gossip, giggling at someone's new crush or celebrating someone else's birthday.

At work, staff come and go. We share stories and testing moments, we eat together and provide comforting words for tough situations. We come, and then we leave, souls watered by the nurturing of others. We make friends for a time because we humans are social creatures, only to move on to the next job with only the happy memories of our time together.

At the bedside, I've been welcomed into an individual's story for a brief moment in time. Sometimes, if time permits, I sit and soak in their world. The war heroes who fought for our nation's safety; dark days emblazoned on military jackets with badges and ribbons. The parents who worry first about their children and second about their own illness that has landed them in hospital. The struggles with the law, with employment, with social divides. Growing up on farms, or in tall apartment buildings, or in war-torn regions, or in limbo. We're all the same and yet we are all so different.

Our hearts pump blood round and round. Our lungs breathe air in and out. Our stomachs digest. Our nerves fire. And yet we've all been shaped by the world we live in. Lines in the sand drawn by men in expensive suits around tables far, far away have split communities across state-lines or national borders based around geopolitics. Border towns create a whole new meaning to wondering what is over the back fence. Patients shuttled from one district service to the nearest tertiary hospital across a state-line face complex paperwork and difficulties with allocations of funding. More drastically, people living on one side of a national border may struggle to see with their relatives arbitrarily allocated to a nation on the other side. Connected by blood. Separated by politics.

As my mind stretches out along the arteries of our roads and flight paths, like tentacles of an octopus feeling for the world around me, I think to our proverbial cousins in Syria and South Sudan and Kenya and Malawi, who dream of the food, water and safety I take for granted. That I have based on a lottery of where I was born, by the luxury of living in a free nation with democratic rights, stable government and generally-effective legislation. I live in a country plagued by drought but where death by dehydration or starvation is a rarity. In many other parts of the world, the physical environment is not the cause of suffering. I think to these people, smart and driven, and yet unable to meet their basic needs based on fear and oppression.

We are all connected by the air we breathe and the earth on which we stand. We are connected by our sameness and celebrate our differences. Those of us who have the luck to sit in planes flying over safe towns, to drive streets where we can be frustrated at the traffic on our way to work, and who can go to the store to buy our supplies each week have so much for which to be thankful. We mightn't be able to single-handedly cease the atrocities happening abroad but that doesn't make us powerless to reach out and to stand up for change. 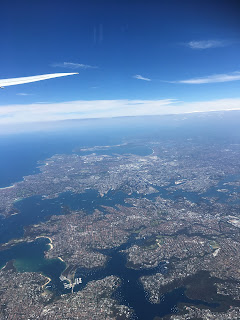