Unlike most babies, she didn't take to baths. The water was scary; the soap smelled odd. Even her first attempt at swimming went down badly, having chased a friend in and been astounded to have the ground disappear under her. Just like all babies, her early days were filled with crying, keeping us awake until strange hours of the night. And yes, there were the accidents.

Dad often threatened to send her back - what sort of mess had we gotten ourselves into? This baby was different to the others. She was the runt of the litter and the little rascal.

December 23, 2000. We hopped in the car and headed out on a last minute shopping trip. "Dad," I said, "you've made a wrong turn, the shopping centre is in the other direction." Dad shook his head, "no, no, we're going to a different shopping centre today. It's too close to Christmas to go to the usual place. It'll be too busy." I thought it was a rather odd thing to do but accepted the answer. And then we kept driving. And driving. And we passed several supermarkets, all of which seemed suitable for doing some last-minute shopping.

And then we saw the RSPCA. And turned in. "ARE WE GETTING A DOG?" I yelled. Apparently everyone else had been in on the secret. This was to be my, and our, Christmas present. A new dog, as the year since the beloved Honey had died had been lonely for us all. We met all of the dogs at the RSPCA, and fell in love with one named Jack. Just as we asked, "can we take him home?" they told us that he'd been used for hunting. We didn't think that was the best idea, considering the adorable Wally Wabbit (all black, except for the cutest little white spot for a nose) was waiting for us at home.

Dejected, we hopped in the car and drove on. Travelling across one of the worst Black Spots on Victoria's roads (I saw a sign and dutifully pointed it out), we ended up at a pet store with many adorable puppies waiting for new homes. We found a beagle who seemed lovely, but he shook like a leaf when we picked him up. Then we saw the little white lab, who had to walk over her very overweight brother (who kept sleeping) to make it to the food bowel. When the puppies were allowed to run around the entire room, the tiny white one ran ahead, proud to be in the lead. Mum picked her up and she snuggled in, as if she'd always belonged. "We'll take her!"

A cute little dog, a new dog bed, some toys and a leash in our possession, we headed home. My brother and I kept peering excitedly over the backseat and into the boot. "Welcome to your new family," we said.  And so the saga began.

This little rascal ate through almost every pipe in our garden watering system, chewed up the power cable to the heating and was particularly vocal about any lacking affection. Dad would yell at her to be quiet, which was successful for all of ten seconds, before the conversation continued. I've never met another dog who has tried so hard to talk.

As she grew up, Cookie decided that she really must be a person, and took it upon herself to sit on the chairs with us. There were two benefits to this - one, numerous pats and cuddles, two, an excellent vantage point to keep an eye on birds in her garden. She took to using a pillow when she slept, whether that was someone's feet (a good excuse, we thought, for someone else grabbing the snack food, remote, or doing the dishes) or her beloved Panda. She also enjoyed breaking rules, playing with rope bone (rope bones to the shin, for the record, are rather bruise-inducing), and sleeping under furniture. The latter became an issue when furniture seemed to shrink and she could fit under, but not out, of her favourite hiding spots.

As with any child, she had her ups and her downs over the years. Once she'd eaten through all of the watering system, however, there really was little worse she could do.

The consistent smell that emanated from her, even right after a bath, became a comforting sign of coming home. Travel as I might (and miss me as she did), there was always the waft of Cookie when I arrived. Grow as she did, that baby bed remained her favourite sleeping spot. It seemed, like many of us, that she just refused to grow up.

And then, this morning, she didn't have to. 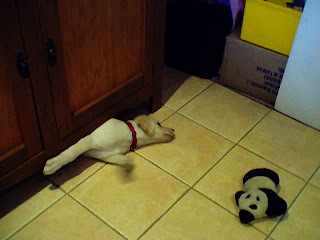 Brooke Sachs said…
Thanks for the hugs, Ms Maverick. I'm not quite sure you'd enjoy the smell unless you were used to it! I'm sorry to have upset you - I just wanted to remember the great times.
15 August 2012 at 22:57