Saturday May 26 marked TEDxSydney2012. Held at the beautiful CarriageWorks on the background of organic vegetables and great early morning coffee from the Eveleigh markets, the morning's clear blue sky hinted at the great heights our minds would reach.

"Do Good Work - Make others happy and you will be happy" came one of the first quotes of the day. The people who are sitting next to you, in front of you, three rows behind you and five seats to the left are the ones who are on your wavelength. Connect, collaborate and together you can change the world.

May 26 also, and more importantly, marks Sorry Day, which received great tribute from Michael West, a member of the Metropolitan Local Aboriginal Land Council. He reminded us that we are on the cusp of Reconciliation Week and we need to work together for reconciliation, a path made stronger through respect, collaboration and love for our fellow human beings. Michael's words were followed by deeply moving music by one of Australia's most loved Indigenous acts, the Stiff Gins.   Their music, and the stories behind the songs, were so powerful that I could feel goosebumps rising on my skin as they sung. I sank into the sound and blinked back tears at the sadness that welled inside me.

Brought back to the present by a small interlude introducing Tom Griffiths, I sat up in excitement. We were to learn the wonders of ice. Not just any old ice, but the sort of ice that has been around for millennia. The sort of ice that tells us the history of this incredible planet. The sort of ice that worries environmental scientists as they fret over climate change and mystifies those of us who can't quite comprehend their art. Tom told us of sailing amongst giant glaciers, of the 90% of Earth's freshwater locked into the kilometres-thick ice of Antarctica, of Ice Ages and migration. Suddenly, modern life paled in comparison to that of this planet.

Following Tom in a strange harmony, Jeremy Heimans, the co-founder of Purpose (amongst many other projects), spoke of killing the language of "Green." For too long, he said, we've focused on selling products because they're environmentally friendly but when it comes to making a purchase, so many other factors come in to play. Consumers want high quality products with social value that don't hurt their wallet. If marketing changes to incentivize people on the basis of irrational thought - belonging, autonomy, security, novelty. If we make consumers feel like they are part of something much bigger, they're more likely to buy into your campaign. If you want to be Green, be something else too.

"What could be more creative than being different?" asked a short film about giving people with disabilities the chance to work. We met Lloyd, a hard-working young man who was employed by a Design firm and found a purpose. As far as I could tell, not only was TEDxSydney about spreading ideas, it was also about getting in touch with your inner human again. Once again, I was thankful for the cover of a dark auditorium to hide the welling tears.

Next up was Michelle Simmons, a Physicist with more titles after her name than degrees. With an expertly crafted sense of how "laymen" understand Physics, Michelle took us on a journey through classical and quantum computing. Moore's Law, she says, can continue on its exponential trajectory, through the power of q-bits.

After a rejuvenating musical session by Greg Sheehan and a delicious morning tea, we were back in the theatre for round two.  Evan Kidd, a psychologist from the ANU, was going to convince us that play is a valuable and often missing tool in learning. The 60% of children who have imaginary friends at some point are more likely to develop Theory of Mind earlier than their imaginary-friendless peers.  Pretend play, he described, involves sequencing events just like you would if telling a story. Benefits of this can be seen in adults - actors have advanced Theory of Mind skills because they have to get into the skin of a character in a way that is believable to the audience. And, schools that have play-based curricula tend to have graduates with more creativity. Play is not only great for thinking differently, it is also a great tool for dealing with stress. So, make sure you take time out to play.

Next on stage was Nobel Laureate, Brian Schmidt, who gave us a grand tour of the universe. Along the way, we learnt about red- and blue-shifts, about the ways in which astronomers measure the distance to stars in our night's sky, Einstein's Theory of General Relativity and the current hypothesis on dark energy and dark matter. After our whirl-wind trip through outer-space, I remembered why I had always wanted to study Physics.

Two audience members were up on stage next. Luca Belgiorno-Nettis, of newDemocracy, described a better future for democratic processes. Derek Williamson, a researcher at UNSW, reminded us that the biggest killers in Australia are mostly avoidable and boil down to fat, sugar, alcohol, sloth, tobacco and sun exposure.

Mandyam Srinivasan (Srini to all his friends), brought mental honey to our minds in his talk about training bees and their similar brain morphology to our own. Through pattern recognition, signalling and scent, bees are able to find their way to the correct destination. They have ways of warning their fellows about danger and communicating the distance away of a good food source. According to Srini, bees are a lot smarter than we think.

Mentally overloaded, our next speaker brought humour to the room with her fabulous talk on euphemisms. Kate Burridge, a linguist at Monash University, described how euphemisms are a way of discussing taboos but in turn become taboo words themselves. It is as if the word itself is the obscenity, rather than the action. And, when one word becomes taboo, those that sound similar suddenly become unacceptable as well, thanks to the visceral sense of disgust that accompanies many of these taboo terms.  The more visceral the response, the longer the word has existed as a euphemism. Despite this, some euphemisms have made it through the centuries without harm - the term "sleeping with" has existed since the 10th Century and "passing away" since the 1300s. It seems that the future is not always bleak if you are a euphemism.

Musical magic by FourPlay brought us, and our brains, to lunch time. After an intense session, it was time to fill our tummies with soup, salad, sandwiches, coffee and fruit. Fantastic chats with friends, old and new, allowed these new ideas to flow and sink into our psyche, hopefully to better the work we do now and into the future.

Session three came around all too quickly with a hilarious architectural duo redesigning our perspective on cities. Anthony Burke and Gerard Reinmuth told us a story of the origins or architecture and how it became boxed into buildings rather than a critical view at population needs, location and perspective. It was a time to wonder why there is so much legislation stifling innovation in the field, and why we are limiting creativity through separating specialties.

Tim Freedman came on stage to wow us with songs about more than love. He likes to tackle world issues and delicate topics with his songs, opening up conversations.  His ingenious way of intepreting hot topics in a comfortable medium was a great introduction to Angela Moles' talk on weeds and flowers.  We were asked to consider what makes a plant truly "Australian" - how quickly we accept a human individual as a citizen and how much longer it takes for plants to get the same title. The plants that were introduced have adapted to our climate and evolved to be quite different from their predecessors. While this poses more problems to our native flora and fauna, it raises important questions for our consideration of these "new" plants as weeds. Perhaps they will eventually co-exist in peace.

Tim Soutphommasane was up next, reminding us that culture is more than food and lifestyle. He spoke wise words about the transition of cultures and the ways in which humans transcend those boundaries to merge into a new culture, one that shapes all Australian views for the future. He was followed by astounding vocals from the talented Katie Noonan. She gave another goosebump-worthy performance, perfect as an introduction for Lynette Wallworth's Coral Rekindling Venus demonstration. We were treated to a visual feast.

After another scrumptious break, Satsuki Odamura and the Sydney Koto Ensemble showed us a little bit of Japan's musical culture because Hugh Durrant-Whyte introduced us to a different concept of robots being a useful addition to our future.  He hinted at how the use of robots for simple tasks frees up human resources to create, devise and plan for a bigger, better future - the sort of future described at by Gerard Reinmuth and Anthony Burke, Jeremy Heimans and Evan Kidd.

Geoffrey Garrett came onto the scene with a new look at America-China relations and how the world is moving into a G2 - a globe with two super-powers who rely on each other for their stability. Where many have hinted that Australia sits on a precarious edge between the two, Geoffrey seems to believe that we are in a perfect position to be friends with both.

Tarsha Finney gave us a quick view of the changing living arrangements that many communities are seeing. In some ways, we are going back to traditional "village-style" living with multiple groups sharing communal areas, rather than each home and family group being segregated from the next. It was easy to see how this could connect to a more sustainable future.

We knew the day was nearing its end when Chris Anderson, the TED Curator, made it on to the stage to unveil one of TED's new initiatives - TED Ed.  The education section of TED hopes to share education from the best teachers to students all over the world. It allows teachers to spread their lessons far and wide while being able to focus more closely on their student's personal growth in the classroom. This is another lever in disruptive education. And it's about time that this took off in education.

To close up the official events, Sam Simmons made us hoot with laughter and the Grigoryan Brothers, along with Circle of Rhythm, played out the show in a musical spectacular. With that, it was time to mingle, let our minds meld and to marvel at the biggest cheesy chunks we'd ever seen.

And with that - take your ideas and spread them! 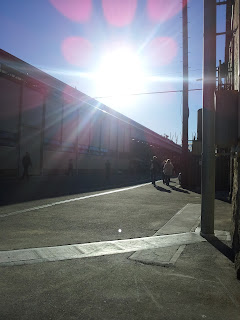