This post is inspired by my time in Ghana.

When you take away the Internet, my brain goes wild. It's like the lack of constant information input leads to a surge in output. A scavenging of every visual and auditory input for data to be organised, analysed and from which I can spit out ideas.

Sitting in the van on long and bumpy road trips from Kumasi and Accra to rural villages, my mind drifted towards Millenium Development Goals and just how much still needs to be done in Ghana to achieve parity of living standards.

There are eight goals. Today, I'll comment on the first.

End Hunger
The bustling streets of Kumasi were filled with people to-ing and fro-ing, huge bags of rice for sale, fried yam and bread available every few steps. There were young people selling sachets of water from buckets that they kept on their heads. For five pesewas (about 3 cents), you could purchase 500mL of water, for 10-20 pesewas, you could get a piece of fried yam. One cedi (about 70 cents) would buy a cup of rice with some egg, coleslaw and tomato-chilli paste (it tastes much more delicious than it sounds).  Food was affordable by my standards, but in a country where the average wage is $2500 a year, these aren't as cheap as they sound. In the city, there constant flows of people buying food, many visible munching on fried yam as they walked around.  Looking around, it also wasn't difficult to see the many who could not afford the plenty of the city. The homeless woman with twin boys that Kate, a local with whom we became quite close friends, took pity on and to whom she gave 5 cedis most days we drove past. The people who walked around on all fours with what looked like complications of polio, who would have no  anti-discrimination support in finding employment. The blind young people we met who suddenly had far fewer opportunities available to them.

When we went out to the rural villages, the image became all the more stark.  The clues that these villages were nowhere near as rich as Kumasi were abundant - fewer people on the streets, the children of Kings in clothes with holes in them, only a handful of food stalls, simpler markets, fewer roads and cars and all of them with potholes and dents, people who looked exhausted despite their excitement to see the health service visit.  The health of these people also seemed to be less than that of their urban counterparts. More teeth missing, more cataracts, more allergies, endophthalmitis. In villages without a great market for 'fast food' sale, there was little available for us to buy and contribute to the community's coffers.

Despite the hunger that I saw, there almost always seemed to be a gift of food for the staff of the travelling eye clinic. Sometimes we had fufu, other times fruit or fried yam. Whenever eating in Ghana, I got the impression that no amount of food eaten was enough. I was always telling people that I was full, exploding at the seams from too much food, and yet still forced to eat more.  People almost seemed to take offence at my state of being entirely contented by the amount of food I'd eaten. It wasn't a concept I understood at all, yet seemingly a result of wanting to prove that they could afford to feed us. That their village was doing well enough to welcome us and thank us with open arms.

Driving through the 'back streets' from the highway to Accra following a truck tipping across all four lanes, we saw the 'real Ghana'. This wasn't a town, these were tiny villages with mud-hunts, streams and seemingly only access to water from the stream that ran past. Seeing the bony frames of these people so surprised to see cars driving through their small community was a wake up call to how so many live so differently to how I do at home.

With the great successes that Ghana has made in recent years on this millenium goal, it is obvious that much more still needs to be done.  Irrigation for farms, better water management, drought-resistant crops and more efficient farming techniques could go a long way to helping people use their land more effectively.

As I begin thinking about my Live Below the Line challenge, I am reminded how much easier this is for me than the stretches of unknown length between good crops and bad, the uncertainty of weather and price fluctuations that face the people in Ghana. 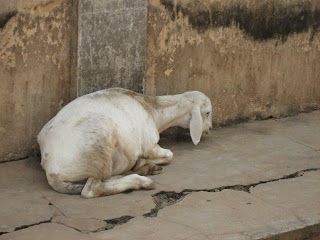