Sitting in the dining room of my Ghanian accommodation, I watched a heartbreaking report of education in the country. It was not necessarily a lack of trained or passionate teachers that was the problem, rather infrastructure so old and poorly build that it was no longer safe to use. One school in the report held classes under a tree because the rooms were no longer useable. In the heat of summer, the bugs bite the children, the footpath next door to their class space is constantly traversed by noisy passers-by, the attention of the students shortened by the number of distractions.

I spoke to the driver of our health bus about the education system and he said it used to cost only a few cedi in co-payment for each year of education at the primary level but that that cost had increased exponentially since. He didn't know how much it was anymore but knew that it could be a struggle for some.  In a country where inflation is high due to huge gains from the mineral boom, the average person has no more money but much increased costs for everything. On top of that, there appears (anecdotally) to be no system for loaning money or order to buy a property. So, instead of being able to defray costs throughout the year, individuals are faced with large lump sum payments on top of weekly expenses.

Many afternoons I would see proudly dressed young people walking home from school. Sometimes they would be walking along the long stretches of highway between towns and villages, who knows how far. Sometimes they were in the city, only with a little way to go. There were large groups of girls giggling loudly, a couple of young guys trying to be cool, the young couples holding hands while their friends ran past them making jokes. It wasn't so dissimilar to post-school antics here.

Some days we would be in a village where the people selling water on the side of the road were definitely young enough to be in school. They offered us food and water, they were cheeky and excited to meet Australians. We asked the optometrist we were working with if these kids were likely to go to school at all, and she said no. Sometimes parents put their kids in the selling position because their cuteness leads to higher yields, sometimes it is because education is too expensive.

On the other end of the spectrum, I met a young man who had three degrees in finance who was working as hotel administration. He was incredibly intelligent and we often had hours-long conversations about the state of the world. He would explain to me the history of Ghana and why the system is the way it is. I asked him if he liked working at the hotel and he said no, it was just a temporary job. A job because it is so hard to get anything in the field in which you've trained that you take anything on offer. A job that doesn't pay him anything equivalent to his skill.

This friend told me a story of someone he knew that had been offered a job at Barclays Bank. In Ghana, you don't get the job you want unless you know someone, which involves being in circles kept to the privileged few. Your degree is necessary but years of experience are always demanded on top because the resource pool is bigger than the job availabilities. This friend was working at Barclays for a month before he could even fathom that it was really his job. He used to go into the office each day expecting someone else to be sitting in his desk chair. It was only with the first pay check that he could accept it to be true. Getting a job solely on the merits of your education is a rarity.

I asked my friend if he could travel to work - get experience in any English speaking nation in the world. He said no, because the university degrees in Ghana don't stack up. He would have to do another few years of bridging courses or new degrees to shape up for whichever market he entered, and that is money that he doesn't have.

I was shocked. Here was someone before me with skill, talent and qualifications, losing his sense of self in a job that made him feel meaningless. He had valued every moment of his education, having seen his countrymen go without. Even then, opportunity hadn't come knocking.

As I sit here writing this, two girls walked past and all I heard of their conversation was "....starving children in Africa..." which is a common phrase here used by our parents to make us appreciate what we have (for the record, no one in Ghana had heard the phrase before). Maybe it's not always for food that they are starving, but for opportunities, for an education that will get them somewhere and for a job market that will let them make their country better.

My short time in Ghana showed me that so many locals were so empowered to make their world stronger, they just didn't know how. With hope, reforming education will give them the tools to be the change they want to see in the world. 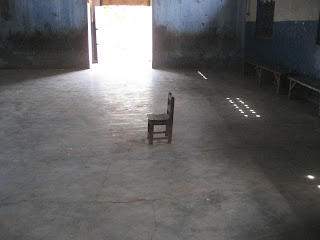