My Trip to the New York Public Library

This morning, after catching up on a few tasks at home, I decided to venture out into the city to look at some buildings. I had planned on visiting the UN and the Empire State buildings as well as going past Chrysler, the library, Bryant Park and taking photos of whatever I came upon in my travels. But, as fortune would have it, I got distracted by the library and my camera decided to run out of battery.

I left the apartment to find the weather a brisk, but not too cold, 32F. Thank goodness! After the blustering cold of yesterday, it was really nice to see some sunshine. Whoever knew I’d be glad to have 0C as the temperature! I walked onto 57th, past the expensive toy store with an impossible-to-spell name, and hung a left at Lexington. As I walked, I took in the strange nature of immensely beautiful buildings cosied up next to the generic 21st century glasshouse. Snuggled at the bottom of all of these buildings were banks and pharmacies, Starbucks (oh how many Starbucks there are here!) and Dunkin Donuts. The contrast of old and new, architectural beauty and mass-produced skyscrapers, places of worship and business, fast food and expensive designer shops reminds me of how diverse this city is. Just like Melbourne, there are so many different cultures. There are so many different areas, so many different things to explore and discover, and yet there is this overwhelming sense that you could look and look and still be seeing the same things. At every corner there’s a Duane and Reades (the drug store of choice, it seems), a Bank of America, a Starbucks and a really, really tall building. Walk five blocks in any direction, and you’ll see a repeat of all of the same chain stores. At the same time, each area has it’s own character. I suppose every city would be like that, but it amazes me to walk around with ‘fresh eyes’ and to notice the repetition. I wonder… at how the branding seems so strong. At how there is just so much and yet…if it’s all repeated then where is the originality? Hmm.

Anyhow, as I walked along Lexington, I took a fair bit of time to appreciate the pretty buildings. The direction I walked meant that I encountered the ‘Hotel District,’ a few places of worship and a whole bunch else. The Chrysler Building and Grand Central Station marked my turning point, and I swung a right along 42nd, heading towards Park (and beyond). Eventually, I made it to the NY Public Library. It’s an awe-striking building. So far, it has been my favourite place to visit.

If you’ve ever been to the Victorian State Library, you’ll know just how amazing the domed room is. The first time I went there, I was dumbstruck by its beauty. I stood just to the side of the entry, and soaked in just how wonderful those wooden desks with their green lamps were. How there were so many books lined up against all of the walls. How there were so many people, and yet so much silence, except for the scratching of pencils against paper. The taping of laptop keys. And, that subtle smell of books that have slowly aged. It’s a huge contrast of the old and the new, but it still seems to fit.

That feeling can be multiplied by about a hundred to describe how it felt to first look up at the interior of Astor Hall in the NY Library. After you make it through the entrance and security check, you’re in this huge hall, named after one of the founding libraries belonging to John Jacob Astor. The hall must be 20 metres high, entirely furnished in marble columns, carvings and tiles. It’s so grand, spacious and impressive. You know that you’re somewhere expensive. In fact, after reading the plaques on the interior, it turns out that the library is on land that was worth $20mil in the late 19th Century, and cost what was then $9mil to build. In today’s terms, that is somewhere in the vicinity of $500mil for the entire library and its grounds.

As one of the top five libraries in the Western world – the British Library, the Bibliothèque Nationale, The Russian National Library and the Washington DC library making up the other four – it certainly is extensive. There are four levels, 52 million resources and plenty of things to take your breath away. Ok, so I know it sounds odd to be so amazed by a library, but it’s no ordinary library. It is an architectural masterpiece. It is a piece of history. It epitomizes grandeur. Knowledge is power, and this library only serves to exemplify this statement.

I spent an hour and a bit on the library’s tour. There, I learnt the history of many of the rooms and the library as an entity. I found myself inspired by both it’s history and the extent of information (and hence culture, life, dedication) contained within the walls of the most beautiful building I’ve ever seen. There’s something special about these spaces.

I don’t know if many other people find libraries amazing, but I’ve always been stupefied by just how much information is out there. Even if I sat down today and just read for the rest of my life, I’d never get through even a small percentage of the books that have been published, or are contained in that library. There are over 128 miles of shelf space in the NY Public Library alone. Fifty-two million items, and I’m sure there are many more the world-over. It makes me realize just how small I am in this big wide world, and yet, just like each individual book goes to making those shelves full, so too does each person go to serving an important function in society. Even in those immense halls, even in the quiet of the reading room there is purpose. There is structure and there is beauty, there are tiny books with even smaller words in this room with the biggest windows, the most expensive marble and the most intricate sculpturing.

After the tour, I went on a wander back around all of the rooms that we’d looked at. I took time to absorb the pictures in the upstairs dancing hall. I ran my fingers along the smooth marble in the second floor halls. It’s wasn’t as cold as I expected. I stood at the great window and looked out, half expecting to see 19th Century New York City to look back at me, but it was the same bustling city outdoors. I wandered around, and reflected on just how pure this place seemed. Outside, there was today, inside there was 150 years of history. One hundred and fifty years that seemed almost untouched by the changes occurring only ten metres outside its walls. It wasn’t like stepping back in time, it was like being enveloped by timelessness.

As time ticked by outside, I thought it a good idea to begin the walk home. I got a few more photos taken, despite my camera’s complaints of low battery. Even in the hustle and bustle of such a populated city, I felt the calm of the library. I felt centred. I felt inspired. I felt an urge for knowledge. And I could see the future stretching out in front of my hurrying feet. 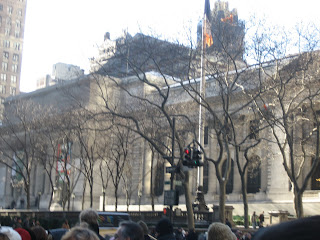