Today marks seven years since those fateful events that seemed to have changed so much in this world. They changed the way the West and the East considered each other, they changed how accepting we are of other cultures and how much we perceive fear.

I don't really want to go into a long winded analysis of cultural implications of 9-11 but I did want to talk about how it affected my little world all those years ago.

Because of the time difference between the US and Australia, the attacks on World Trade didn't actually happen until the late night news on 9-11. I remember waking up on the 10th and the TV was on, which was not at all a normal occurence in our household. My breakfast was all ready for me on the table but I slumped into a couch chair in shock and horror at what I was seeing. I couldn't quite understand what had happened or why or how. It didn't make any sense. In fact, in the ensuing seven years I'm still shocked and horrified by what happened and I really just don't understand how there can be so much hate that something like that would happen.

As I sat in my chair and stared at the TV, I remember trying to ask my dad what was going on, but that he told me to shush. I was scared. I remember thinking that my cousin and my aunty lived in NYC and I didn't know where they worked and what if something had happened to them. My dad spent the entire day trying to call his family, but the phone lines were so busy that I didn't know if they were okay until I got home from school.

Even though I still don't really know my cousin all that well, because we have the privledge of living in completely different countries, I spent the entire day reliving all of the moments that we'd had together when I was five (but nearly six, I told myself) and wondering if I'd ever see her again. I spent the day wondering how anyone would want to hurt my other country and wondering how the things that we've always understood about life could be turned upside down in an instant. I thought about the fact that my best friend was flying to Hong Kong not even a month later for a family holiday and how I didn't want her to go because I was scared something bad would happen to her. But most of all, I was struck by this sense of complete naivety and youth and the fact that my little world wasn't going to be so little anymore.

In my class at schoool there was a guy who had spent his childhood living in the US. My teacher had wanted him to come to school to be with the support of his classmates, and so at around lunch time he turned up with his mum and sister. The three of them were a ball of tears. I saw so much hurt and pain in their eyes, and it seemed to represent what was going on inside of me. I thought again of my cousin and my aunt and how someone out there had hated home so much that it got hurt. And how that just didn't seem fair at all.

My mum picked me up after school, and we went to pick up my brother. I have this distinct memory of leaving our old house (which we still owned and used solely as a pick up point after school) and my brother packing into the car. Mum made some sort of complaint about him not using enough deodorant. I was just happy that my brother was safe. That song 'Dream on White Boy' or whatever - that I think is by INXS - was on the radio. I think. Or maybe that's a different memory. It was sunny and there were pretty little flowers growing in the green grass. I saw the streetpole outside our neighbour's house and remembered the car that drunkenly crashed into it so many years before. And I wondered if Naomi was okay.

It turned out that no one in my family was hurt themselves, although they were all rather shaken by the day's events. My aunt worked only a few blocks down the street from WTC, and had been evacuated after the crash. My cousin worked on the other side of town.

A year later, I was in NYC from August 28 until September 1. We went to see the site of WTC and it was just this huge empty hole in the ground. I could see where the subway used to be. There were flowers and memorials across the fencing keeping us from falling into the 10 storey hole in the ground. Most of all, there was this incredible silence. If you were on the street looking at Macy's and all of the buildings, it was almost normal. But as soon as you walked towards those fences it was so silent. There were 1000s of people paying their respects, but nothing more than a whisper of human presence. We could hear the drilling and the sawing and all of the construction going on down below, we were all there and yet we were so isolated in our grief. Grief for people we didn't know but could understand. Grief for the everyday citizens who'd been in the wrong place at the wrong time. Grief for how anything like that could ever happen and grief for the way the world could never go back to being sweet and innocent.

As time went on, it was easy enough to forget how powerful those moments were. But sometimes I leaf through my bookshelf and find the issue of Time Magazine that was the first anniversary edition. I read through its now thoroughly wrinkled pages and am again struck by how huge 9-11 was. How massively it affectly the US and the world. And how, no matter how much we move on, it's important to remember the tragedy. If we forget how powerful that day was, we'll forget why it happened and forget that we need to improve our humanity. 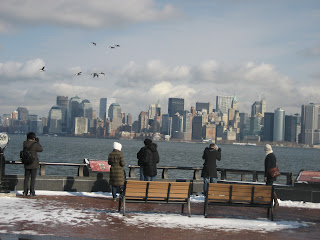